The nature of the marshland and the wide expanses make the area around Ribe and Esbjerg ideal for cyclists, no strength-sapping mountain stages here!

The Wadden Sea Coast by bike: the perfect way to experience the area. Large parts of the area are both a national park and a UNESCO World Heritage Site, so it is a very special place indeed. Whether you are cycling along the dykes in the Wadden Sea, exploring the Marbæk Plantation north of Esbjerg or experiencing idyllic Fanø with its huge beach, you will be surrounded by unique landscapes and aware of the forces of nature.

The first 3 stages of National Cycle Route N1 The West Coast Route follow the Wadden Sea Coast. Most of the time the route follows the dykes along the coast but it also passes through Ribe and Esbjerg. The stretch as a whole really gives one a sense of how water and wind have shaped the landscape.

Fanø is a small island that is very easy to get around. It is only 12 km from Nordby in the north to Sønderho in the south. There are cycle paths between all the inhabited areas, and the North Sea beach,smooth, hard and perfect for cycling is a unique experience in itself.

5 different cycling routes have been made on Fanø, including the 26-kilometre panoramic "Air under the Wings" route around the island.

Here it is possible to combine cycling in both urban areas and natural landscapes. The city itself has a healthy provision of cycle paths, so getting around Esbjerg is safe and easy.

The 17.5 km “Cycle by the Water’s Edge” route takes in the 2 northern suburbs, Sædding and Hjerting. Hjerting was the original settlement; Esbjerg itself did not develop until the middle of the 19th century.

The “Ho Bay route”, 27 km long, takes you around the northernmost, more peaceful part of the Wadden Sea. It follows the bay and offers excellent views out to Fanø, Skallingen and Langli, then dives into the beautiful Marbæk Plantation. The return route swings through the two small villages, Kokspang and Guldager.

The free “ta på cykeltur” cycling map of the local areas is available from visitor centres. This website also has a couple of good “print-out” options.

Denmark's oldest town, Ribe, full of traces from the Viking Age, is the no. 1 starting point for trips around the flat landscapes of the Wadden Sea.

The 56 km “Stormflodsruten" or “Storm Surge Route” takes you around the rugged low marsh landscape and out behind the sea dyke – which today protects us all against the violent forces of the sea that previously cost so many lives.

The free “ta på cykeltur” cycling map of the local areas is available from the visitor centres. This website also has a couple of good “print-out” options.

Mountain-biking on the Wadden Sea Coast

With such extensive sweeps of beautiful natural landscape, there is a host of possibilities for mountain-bikers. To date, there are 8 marked trails in the area.

These include 2 close-to-the-city trails in Esbjerg and a wonderful trail through the Marbæk Plantation to the north of the city.

A further 4 trails are to be found a little further from the coast around the villages of Bramming and Gørding.

Last but not least is the 7 km mountain bike trail in the dune plantation on Fanø.

One of the best ways to get around, while also getting close to both the sea and the marsh, is on two wheels. The Wadden Sea is nearly devoid of hills, and therefore accessible to all levels of proficiency. We do, however, have a fair amount of wind.

Below you will find a list of tips we have put together to help everyone protect the natural environment while we enjoy our rides. 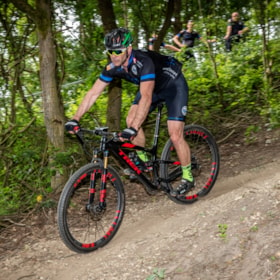 In Sædding Ådal’s beautiful nature you will find Mentor IT Bikepark. The park has been established by MTB Esbjerg with support from Esbjerg Kommune an... 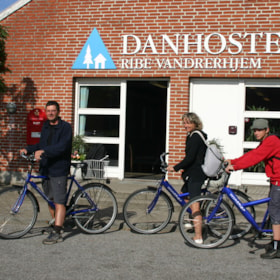 Danhostel Ribe rents out 30 bicycles, of which 2 is electric bikes. By bike rental you get a free bicycle card with local bicycle routes. 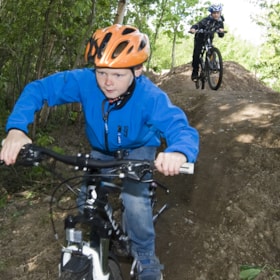 Experience Esbjerg and the Wadden Sea area on a mountain bike, or try one of the MTB tracks in either Marbæk Plantage or Ådalen.

Experience the Wadden Sea on a fresh bike ride, the bike can be rented at Hjerting Badehotel on the Strandpromenaden by Hjerting Strand.