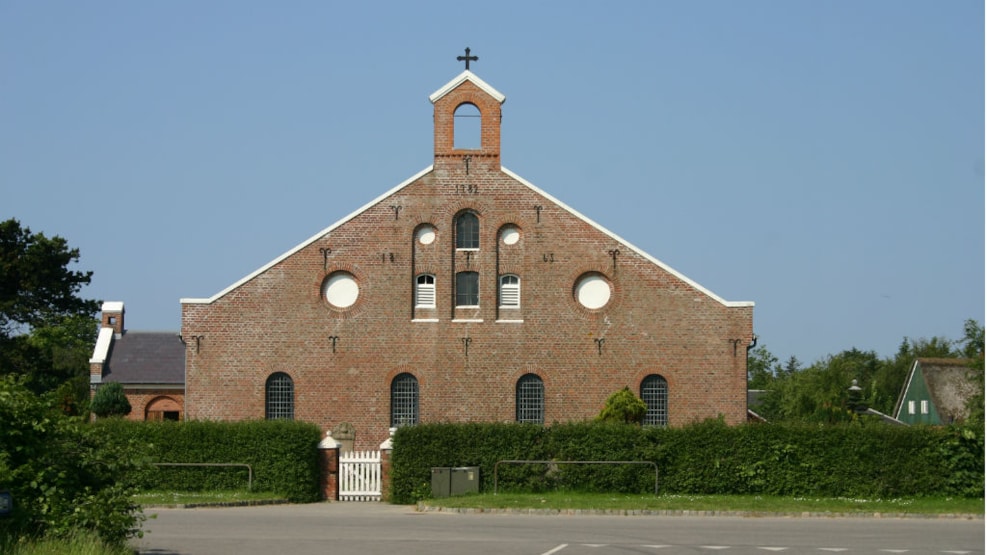 Sønderho Church was built in 1782 and the construction is quite unique. According to local tradition, it was built as a narrow nave with a built-in transept. As the population grew, extensions were added.

The old furniture of the church was adjusted to fit in: a baptismal font from the 13thcentury, the altar dated 1717, a gallery for "poor people and other strangers", the pulpit dated 1661 that supposedly comes from the hospital chapel in Ribe, and the confessional. At that time, the most essential part of the service was not the communion but the sermon and so the pulpit was placed midway on the south side. The church had become an assembly-hall church.

Brass holders for tallow candles that had been donated by seamen over the years made up the lighting. Like the rest of the village, the church was wired for electricity in 1932. This furniture is still to be found in the big church which seats about 450 people today, the number of those attending Christmas Eve services, even though the population of the village, as of the most recent census, is only a about 340.

In the beginning of the 20thcentury the church took over the used pews from Ribe Cathedral. It might be fair to call it a neo-gothic style.

From the low, wooden ceiling hang a total of 15 votive ships. The only warship is a frigate that came by sea 200 years ago (it was found by the water's edge.) Except for a lifeboat and a lightship, only a few of the remaining merchant ships are actual models. Most of them were carved from memory by seamen and donated to the church, clearly emphasizing the connection between the sailors and their church. The church interior is whitewashed and the low ceiling painted grey. The furniture is kept in traditional, rustic colours. All in all, the church room appears friendly, warm, and obliging. The original, clear windows were replaced with leaded, coloured windows sometime in the 1940s.

In December 2006 a new organ, built by Danish organ builders Christiansen and Sons was inaugurated. It replaced the old pneumatic organ from 1903, and with its 16 (optional 18) registers it far more fits the acoustics and architectonic characteristics of the church.

In the north western corner of the church, gravestones that date back to around 1700 have been set up. They have all come from the churchyard, but were placed inside the church around 1965 to prevent further crumbling. They are made of sandstone and tell something about the history of the parish. There are still very old sepulchral monuments to be found in the churchyard.