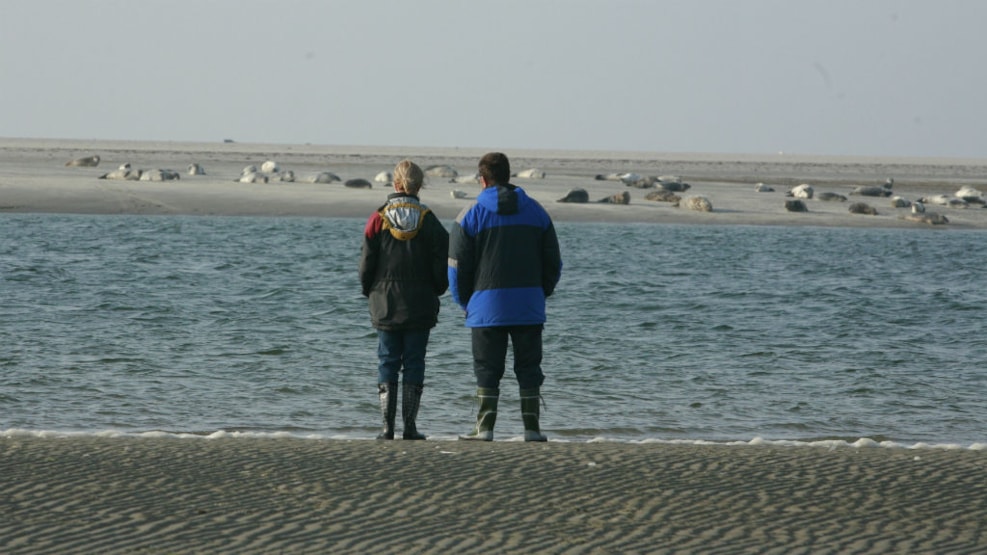 The seals are one of the main attractions on Fanø. Here, we can experience the harbour seal and the grey seal in their natural environment.

Several places in the sea around Fanø, the seals can be seen basking in the sun on the sandbanks or bopping their heads up in the water.

There are guided tours to Galgerev, a large sandbank, south west of Sønderho, where it is possible to see up to 700 seals. At low tide, you can walk approximately 1.7 km on the seabed all the way to Galgerev. This is a sandbank that isn’t flooded at high tide. Between us and the seals is a channel with a width of approximately 100 metres, so the seals are not disturbed by us. Sometimes, a seal will jump into the water and swim closer to see what is going on.

The harbor seal is hale and hearty
You can experience the harbor seal in all Danish waters. The population is especially large in the Wadden Sea. The harbor seal has, since 1977, been totally protected. Slowly, the seals have grown accustomed to mankind no longer being so dangerous, which means that it is possible to get close to these fascinating animals, thus observing their impressive adjustment to life in the ocean. Although seals are specialized for a life in the ocean, they are totally dependent on being able to reach land where they can rest and feed their young. The many mudflats in the Wadden Sea are therefore as important as the shallow ocean with its rich diversity of food.

The grey seal - a giant returns
Throughout the Wadden Sea, it has been possible in recent years to enjoy the sight of not only the common harbor seal, but also the more rare grey seal. During the last ten years, the groups of grey seals congregating on the sandbanks have increased, and on Langjord, opposite Fanø, it is not unusual to count 50 animals in May when the seals molt. The bulls can weigh up to 300 kilos and are often very dark, almost black. The smaller cows can be difficult to distinguish from the harbor seal, but they are markedly bigger with the grey seal’s characteristically cone-shaped head. The habour seal’s head is much rounder.