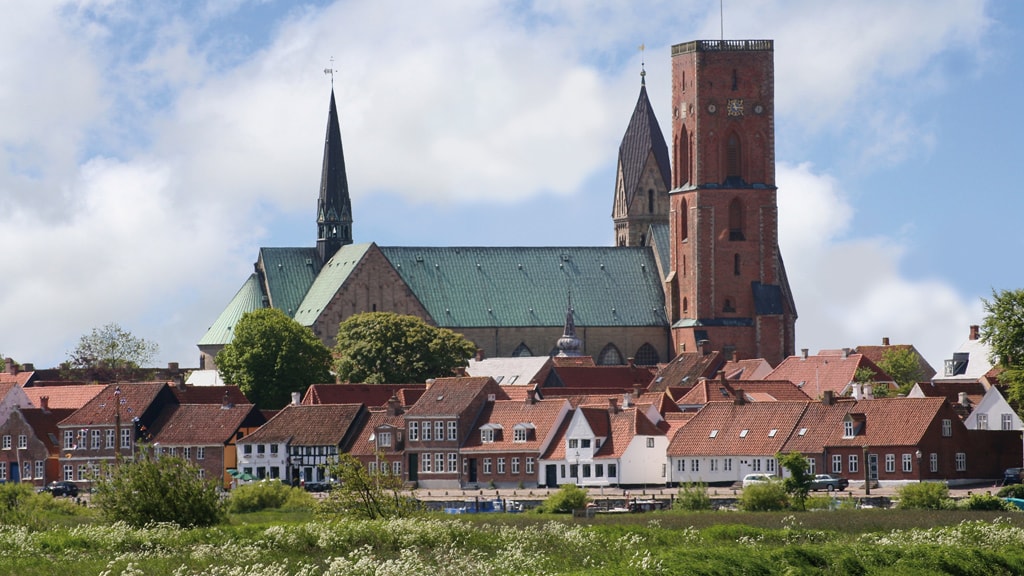 Ribe Cathedral - The Church of Our Lady - from the year 1200 built of Rhenish tuff stone with later Gothic changes and additions made in brick. The Cathedral was originally built as a three-aisled church with two identical towers.

Ribe Cathedral is visible for miles across the flat landscape, and it is amazing to think that travellers have been met by this sight since the middle of the 13th century when it was completed. Ribe Cathedral is the oldest cathedral in Denmark.

Vor Frue Kirke (The Church of Our Lady), as the cathedral is actually called, became the only five-aisled cathedral in Denmark following numerous alterations and additions. The present-day building is characterised by a wealth of different styles and interesting details. There are sepulchral monuments to some of the most powerful men of the town and the nation as a whole, as well as the oldest sepulchral monument in Scandinavia, erected by King Valdemar the Conqueror to a son who died in 1231.

Borgertårnet (The Commoners’ Tower), which dates from the 14th century, functions as the town’s watchtower and storm tower and provides amazing views of the marshes. The 52-metre-high tower is entered through the cathedral (please note that children under the age of 14 must be accompanied by an adult). At the foot of the Maria Tower, which houses the cathedral bells, stands a statue of Hans Tausen (1494-1561) - monk, Lutheran and protagonist of the Danish Reformation, appointed Bishop of Ribe in 1542. Next to Tausen stands a statue of the hymn writer Hans Adolf Brorson (1694-1764) - Pietist, rural dean in Ribe 1737, appointed Bishop of Ribe in 1741. On the south side of the cathedral stands the sculpture of Ansgar, made by the artist Hein Heinsen in December 2015.

Bishop of Ribe
It was around 860 that Ansgar, known as the Apostle of the North, was given permission to build a church in Ribe and to let a Christian priest reside there. It is only from the year 948 onwards, however, that can we say for certain that Ribe has had a bishop and therefore a cathedral.