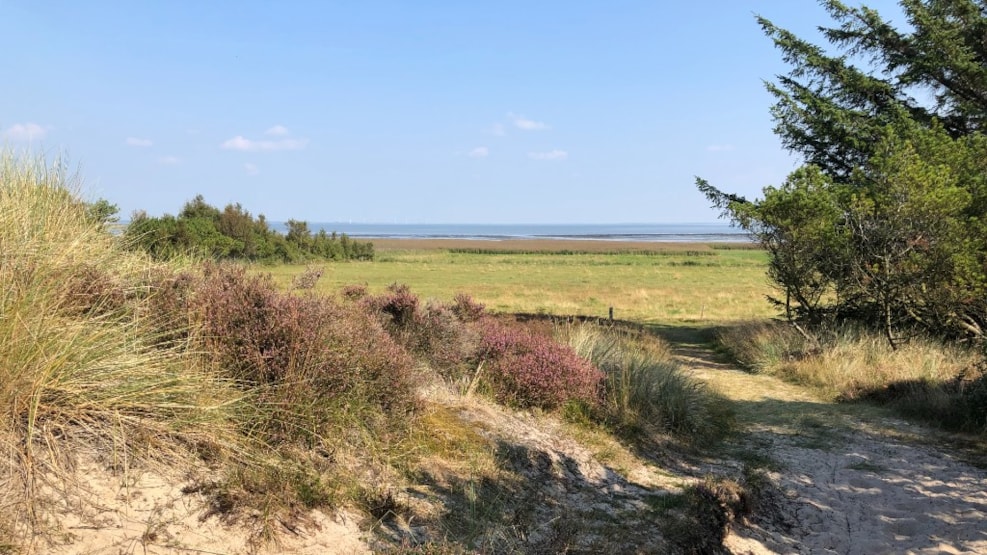 The hiking route on Fanø is a combination of 2 existing routes created by the Danish Nature Agency. The two routes are located on opposite sides of the road that connects the two villages Nordby and Sønderho. The area is part of the Wadden Sea National Park.

The route is in a figure of eight pattern, and there are several different potential starting points for the trip. The selected starting point here is "cyclist rest stop" on the corner of Postvjen [sic: Postvejen]/Mågekolonivej, where there are a number of facilities such as maps of the area, a covered picnic area, and hammocks. Alternative starting points are the parking area leading to Sønderho Gamle Fuglekøje (an old duck decoy), or from Skovlegepladsen (the forest playground), where you can find map material, toilet and picnic area.

The following description has its starting point from the rest stop on the Postvejen/Mågekolonivej corner.

From the starting point at the rest stop at the Postvejen/Mågekolonivej  intersection, one continues along Mågekolonivej  to the parking area 0.4 km to the west. Mågekolonivej was built during World War II as a supply route to the defence facilities constructed along the beach. Today, the Concrete Road is the access road to the Forest Playground.

From the parking area continue along the gravel path 0.6 km to Pælebjerg, the highest point of the island. Here there is a beautiful view of the plantation and the beach to the west.

Continue on the yellow route 2.5 km to Sønderho Gamle Fuglekøje. You will first walk on a farm track eastwards, where you will have a view of the Wadden Sea after about 1 km. Then to the north-east through both scrubland and dune heathland with heather and forest. After 1.6 km on a walking trail that twists with the landscape, turn left on a farm track that leads through the forest to Sønderho Gamle Fuglekøje.

Sønderho Gamle Fuglekøje was built in the 1800s with the aim of catching ducks during migration. Ducks were captured until 1934, when this form of hunting was banned. Sønderho Gamle Fuglekøje now serves as an open-air museum with information boards and the duck decoy, along with the birdlife you can experience in the area. There is also a bird watching platform overlooking the Wadden Sea.

From Sønderho Fuglekøje walk 1.8 km to the north on the yellow route to Annedalsbjerg. The first section is a broad hiking trail, after which one goes through a gate and continues on a hiking trail in an open dune heathland overlooking the Wadden Sea. The last section runs along a farm track on the outskirts of Fanø Dune Plantation.

Annedalsbjerg is one of the oldest dune areas on Fanø and from the top of the dunes there are views of the dunes plantation, the marshland to the north and the mainland on the other side around Esbjerg. Here one also finds the second of the two duck decoys that can still be seen and visited, Albue Fuglekøje.

From Annedalsbjerg continue 1.4 km southwest on the yellow route. Here one travels through some of the oldest of Fanø Klitplantage and then through open dune heathland until the yellow route ends back at the parking lot by the main road.

Cross the main road and hike on the bike path to the north 1.2 km back to the starting point at the cyclist stop at Postvejen/Mågekolonivej.

Main road must be crossed twice, otherwise none

You walk through the typical Fanø landscapes, plantation, open new dune heathland, old dune heathland and the route alternates between the types of landscape several times

None, the entire route lies within a protected natural area without settlement.