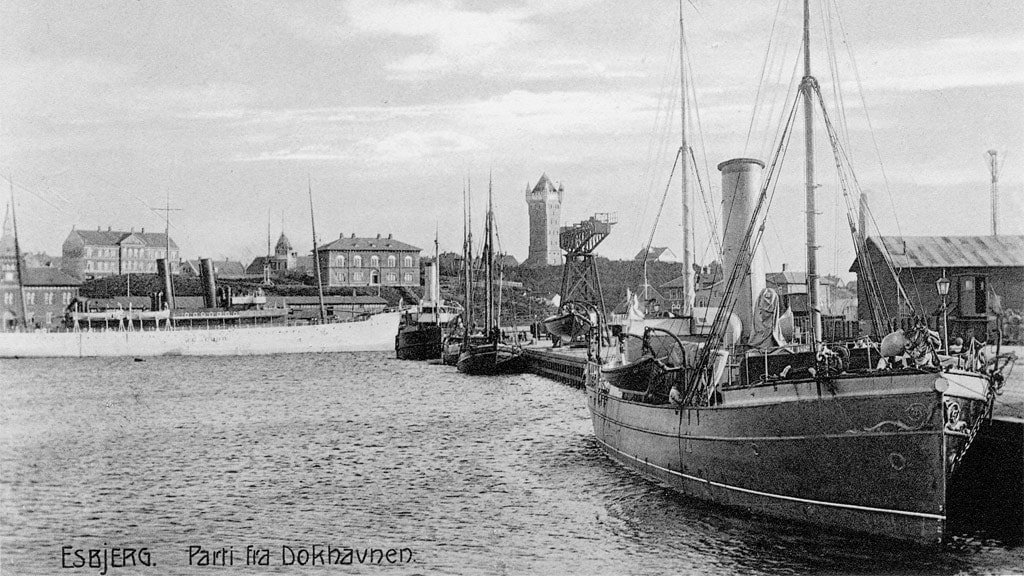 From 250 meters of wharf to 12 kilometers

An exciting and fascinating tale of Esbjerg harbor and its development over the last 150 years.

Today, it is impossible from a public place in Esbjerg to get a comprehensive overview of the harbor. 12 km of quay bends along the coastline and is a living organism, constantly undergoing expansion and adaptation.

If you came to the same place for approx. 150 years ago, Esbjerg was just a small settlement with two farms, three houses and 23 inhabitants. The inhabitants lived by farming and supplemented with a little fishing.

With the loss of Schleswig and Holstein after the war in 1864, Denmark no longer had ports on the west coast of Jutland, as they all fell to Prussia at the end of the peace. On the Danish side, however, they did not want to use these now foreign ports, but wanted their own.
After thorough research, the choice on Esbjerg fell as the place where a new West Coast port was to be constructed. Here, the coast quickly became deep, so there was minimal digging, which played a role in a time when the construction tools were bucket and shovel, wheelbarrow and horse-drawn carriage. In favor of the site, it was also said that both Fanø and the peninsula Skallingen provided shelter for the fierce North Sea, so that the large sailing ships without engine power had calmer waters to maneuver in as they had to enter through the narrow sluice gate to enter port.

On April 24, 1868, the National Assembly passed the law on the construction of a port in Esbjerg, and on November 17, 1868, the Swiss engineer Carlé obtained the contract and promised to have the project completed in three years. However, he was later put off the order and by then the port was far from finished. On August 15, 1874, it opened for sailing, but completely finished it was not until 1878. A total of 250 yards of quay were there from the beginning.

The port was built for the sake of Danish agricultural exports of live cattle and pigs. No one thought of fishing, nor that a city would come by the harbor. Any newcomers expected that they would settle in Nordby on Fanø and then commute back and forth. Common sense, however, caused the migrants to buy a plot near the harbor area and build small houses for housing. The sparse but ever-expanding settlement provided a breeding ground for a beginning trade with merchants, butchers and bakers, just as the first fishermen found their way to the quiet basin of the Port. An urban community began to grow up in the place where there should have been nothing more than a port.

Esbjerg Harbor's further development became the story of constant adaptation and adjustment. Not much was, as it was intended. The export of live cattle and pigs was hit by export duties in England and Germany in the late 1870s, which caused Danish agriculture to switch production to processed animal products such as butter and bacon, which had become much in demand in the English market. Fortunately, these products from especially dairies and slaughterhouses could also be shipped from the Port of Esbjerg.

The new agriculture needed a lot of raw materials and auxiliary materials that could be imported via the Port of Esbjerg, just as the beginning industry required imports of raw materials from abroad. Fortunately, the harbor was also suitable for these tasks, and not least it had the advantage of being almost ice-free. More and more people moved to Esbjerg, which in 1899 gained the blue stamp as a city by being elevated to a market town - the population had grown from 23 to 12,967 in 1899.

In the 1890s fishing grew rapidly and was until approx. 1970 the locomotive in the continued development and growth of the port and the city. In the late 1960s, oil exploration in the North Sea yielded results, and with the energy crisis of 1973, extraction became profitable. It swirled Esbjerg into an offshore adventure, which made the city Denmark's first and only offshore city, and within the last 20 years the oil has been supplemented with wind energy, so today it is spoken of Esbjerg as an energy metropolis. Wind turbine shipping not only characterizes the area of ​​the port, but also the roads around town and port. And the place where the adventure began in 1868 with two farms, three houses and 23 inhabitants, today names a municipality that, after structural reform in 2007, has over 115,000 inhabitants.